Caitlin is just one of the hundreds of children who are waiting and hoping for their chance to come to Barretstown this year.

Seven Years ago, Antoinette and her husband Declan brought their four children Seamus, Oisín, Ciaran and baby Caitlin – to one of our family camps. Oisín had a rare form of Leukaemia. He was only six years old and although he was very ill, he enjoyed every minute of camp. Oisín talked about coming back to camp when he was better and was looking forward to riding the horses. Tragically, this turned out to be the family’s last trip away together as Oisín lost his battle with cancer soon afterwards.

The Doyle’s returned to Barretstown, on what would have been Oisín’s 7th birthday, to attend one of our bereavement camps.

Antoinette told us about her experience at bereavement camp “Barretstown contacted me after to see if we would be interested in going back to do the bereavement programme. You’re very vulnerable after losing a child, and you’re literally hanging on by a thread. Was this going to push us over the edge? How wrong could I be? This was where we learned to be a family again.  It was somewhere that we could laugh and cry within a couple of minutes and nobody would think we were losing the plot altogether.”

Four years later, just when their lives started to feel normal again, Antoinette and her husband got the news they were hoping to never hear again. Their little girl, Caitlin, was diagnosed with Acute Lymphoblastic Leukaemia. For a family that had already lost one child to cancer, this was devastating.

“Telling your children that their sister has cancer, after losing their brother to it is heartbreaking. They’d seen the realities of cancer before through losing Oisín and its very frightening to think you can lose a second child.” Antoinette Doyle

Antoinette and her husband Declan once again found themselves stretched between hospital trips with Caitlin, while doing their best to raise their sons Seamus and Ciaran. For children and families who’ve never experienced Barretstown, our camps may seem simply like fun holidays for children who are sick. Children do have lots of fun at Barretstown, but behind the fun there’s a serious programme, backed by doctors in Ireland and worldwide. This programme has been designed (and proven) to help children who are recovering from cancer.

Caitlin is still in the middle of her treatment, but she is getting stronger every day. This summer she may be close to finishing her two and a half years of treatment. By then she’ll hopefully be strong enough to come to Barretstown.

The Doyle’s are one of many families who we have supported and continue to support. At Barretstown we like to keep supporters up to date on the lives of the children and families we help through the camps we provide. For every child and family who has been to our camps, there’s a caring person who brought them here. Please help us support the Doyle family and enable them to return to family camp this year.

Did you know that 96% of our funding comes from supporters like you? If you would like to support our work, you can do so by volunteering or donating now! 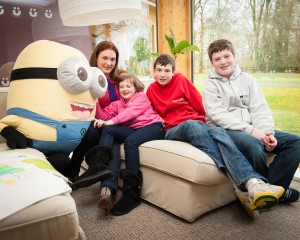