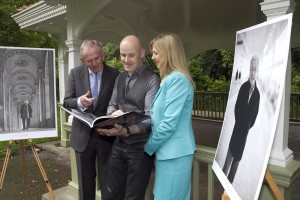 The first of its kind, the book captures images of the photographers who normally operate entirely behind the lens, and brings them to the fore alongside some of their famous photos.

Commenting about the project, David Cantwell said, “The idea for the book arose when I photographed Ricky Stephens, a photographer friend of mine and a founding member and past president of the Irish Professional Photographers Association (IPPA). I then went on to photograph the past presidents of the IPPA for the organisation’s 60th anniversary and realised that I had never seen a collection of the world’s greatest photographers.”

Speaking about raising money for the charities, David said, “I have been working with both Haven and Barretstown for the past five years so it was an obvious choice for me. I regularly photograph families at the bereavement camps at Barretstown.  Very often families, after they lose a child, simply stop taking family photos and what I do is try to encourage them to start again.  For Haven I recently visited Haiti and captured the extent of the devastating earthquake and how four years later charities like Haven are making substantial inroads in bringing the country back from this tragic event.”

David has been working with the children’s charity Barretstown since 2008.  Barretstown provides therapeutic recreation or “serious fun” to families affected by childhood cancer.  2014 marks the 20th anniversary of the children’s charity which has helped over 27,000 seriously ill children and their families since 1994.  Haven is an Irish NGO working solely in Haiti to build sustainable communities, after the devastating earthquake, through the provision of adequate sanitation, shelter and training solutions for vulnerable Haitians.

Speaking about Snap Dragons, Leslie Buckley, Haven Founder said: “David has been such a tremendous support to Haven over the years, always ready to offer his support.  This book is not only a display of David’s fine talent as a photographer but a testament to his passion for helping others.  We are honoured David is part of the Haven family.”

Also commenting at the launch, Dee Ahearn, Chief Executive of Barretstown said: “David is a long term supporter of Barretstown and in particular our Bereavement camps, which we host a number of times each year.  These camps are devoted to supporting families who have lost children to serious childhood illness and David’s work of encouraging those families to start capturing special family moments through taking photos is really important. We are delighted that David has chosen to support us with his wonderful book.  The book is a testament to his commitment to photography, creativity and innovation.”

Cantwell started the project by photographing two of his inspirations; Jeffery Scott and Greg Gorman in California and has spent the last twelve months adding photographers to his list.

David LaChapelle      “Archangel Michael: And No Message Could Have Been Any Clearer.”

Snap Dragons will retail for €40.00 from Easons stores across Ireland and 100% of the profits  will be divided evenly between two charities that David regularly supports, Barretstown and Haven. The book can also be purchased from David Cantwell’s website at www.davidcantwellphotography.com/photography-books.htm