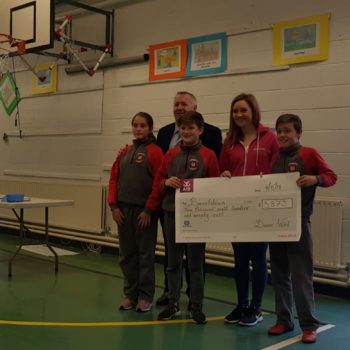 Everyone was split into groups of six or seven for the stalls. We sold cakes, sweets and we also had a lucky dip and other activities! We had loads of fun selling things and painting nails, which we did when the second class were in the hall. We all dressed up and lots of the little kids thought it was really funny that we all dressed up. We had a blast even though it was the most exhausted we have ever been afterwards. After lunch we had to tidy up the entire hall, which was even MORE exhausting! But it was all worth it in the end because we collected a whopping €3870!!!!!!!!  However, the best part is that a VERY, VERY generous parent said they would MATCH the amount we made so both of the charities received €3870 each! I think it’s fair to say it was a very successful day!