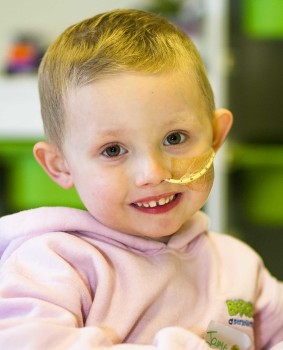 Jaime Jane was just three when her world was turned upside-down. Too tired to run around and play with her friends, her parents thought she might be anaemic, so they brought her to hospital for blood tests. Jaime Jane was diagnosed with Acute Lymphoblastic Leukaemia. Twenty four hours after visiting Waterford hospital she was on St John’s Ward in Crumlin.

Jaime Jane had to stay in hospital for the first eight weeks of her treatment, as doctors kept a close eye on her for infection. Surrounded day and night by doctors and nurses, she struggled to make sense of what was happening to her. Jaime Jane was allowed home after the initial treatment but spent months isolated from the world due to fear of infection.

But by the Spring, she had started to improve. Her parents had heard about Barretstown in hospital, and decided that our camps might be just what Jaime Jane needed. Still weak from a recent course of chemotherapy treatment, Jaime Jane came to her first Family Weekend Camp in spring with her parents.

She had a ball! Lisa, her Mum explains…

she was weak when we got to Barretstown. We had to borrow a buggy to get her from place to place so she’d have the energy to join in all the activities. She absolutely loved it! Dressing up was her favourite activity. She loved putting her hands above her head and pretending she was invisible. She’s still doing that today!”.

I think she just kind of realised, maybe a little switch flipped on inside of her, like ‘yeah, I can do this!’ whereas before she might have been more focused on her illness. She has definitely come out of her shell.”

According to Enda, Jaime Jane’s Dad, Barretstown…gave her a big reminder of what she could do and how she could be Jaime Jane’s parents believe with all their hearts the vital role Barretstown has played in helping their daughter.

Watch this short video of Lisa and Enda talking about the impact of Barretstown.