In January 2010, teenager Louise Johnston was diagnosed with a brain tumour.  Following a successful surgery, the tumour was removed.

She underwent intensive physiotherapy over the next few months. Through the medical team who were taking care of her she became aware of Barretstown. Louise attended Barretstown and has since been back to as a volunteer.

As Louise’s 21st birthday was approaching in 2014, she decided she would use this special occasion to fundraise for Barretstown, the organisation she said that had given her everything when she felt like she had nothing. In her own words Louise said her mission was:

To raise as much money as possible in the hope that more young people who are diagnosed with serious illness can experience the magic of Barretstown.” 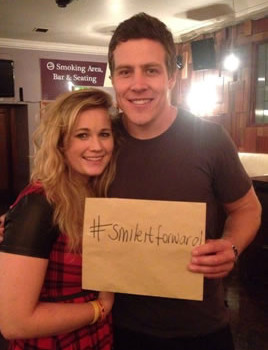 Over a number of months Louise rolled out an amazing fundraising campaign #smileitforward. Through her online fundraising page, a text to donate number, celebrity endorsement and by selling wrist bands among other things Louise surpassed all expectations:

“I attended camp in 2010 and 2011. Barretstown came at a time in my life when my self-confidence was extremely low.  It gave me the opportunity to meet others who have been through similar circumstances and it allowed me to be a ‘normal’ child again, without any therapy or doctor appointments to worry about.  When I attended camp, I always said that I would love to volunteer when I’m older, and I have done just that now for two years. The staff were the people that made camp the happiest and most magical experience for me, and it’s fantastic to now be a part of other young people’s journeys.

For my 21st birthday I decided that I would hold a fundraising 21st  party.  I wanted to give something back and make even a small difference to a place that contributed so much to my recovery.  And so, my 21st wish came to life – to raise as much money as possible in the hope that more young people who are diagnosed with a serious illness may experience the magic of Barretstown.

The support I have received was incredible, beyond anything that I could have ever imagined.  I created a hashtag #smileitforward where people could follow my fundraising campaign on social media. Home and Away star, Steve Peacocke, sports personalities including Gordan D’Arcy, Shane Lowry, Rio Ferdinand, Joey Barton and more got involved in promoting my campaign.  On the night of the 6th September, the party took place with local Cavan band ‘The Highstool Prophets’ providing the entertainment. Some serious fun took place with six male volunteers getting waxed!

Overall it was a great experience and I was overwhelmed by the amazing amount of money raised.“ 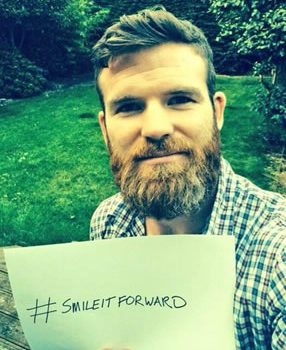