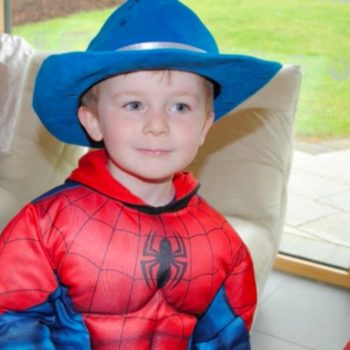 Leo came home from a family camping trip with a temperature. His doctor prescribed antibiotics, but his mam knew something was wrong, when after a few days, Leo wasn’t getting better.

We had to wait 24 hours for them to do a bone marrow test and get the results. It was a nightmare, because we spent the day going ‘is it, or isn’t it leukaemia’? But I knew in my heart that’s what it was.

Leo faced a three and a half year course of cancer treatment. It was especially hard on Leo in the beginning. He struggled with his steroids, which caused him terrible nightmares and hallucinations. And he was set to start Junior Infants that September. But because he was so sick, he didn’t start school until the following January. Starting school is a huge deal for any child. It’s often when they form their first friendships, and start learning to be independent. But for Leo, it was the first time he was away from his mam and dad. He really struggled.

Leo came to camp during the early and most intense phase of his cancer treatment. It was a lot for him to take in, as his mam told me …

It was just so overwhelming when we first came to Barretstown, with all the music and singing. Leo hid under the table during dinner time!”

The Caras lined up outside the dining hall dressed in costume, and all the families walked through them. Normally Leo would hide behind us, dying of embarrassment having to walk through these adults. This time he ran off ahead, high-fived everybody, and ran in by himself!”

Leo’s parents couldn’t believe it. This was the same boy who hid under the table when he first arrived to one of our camps!

Ever since Leo’s last trip to Barretstown, his mam has seen a big change in him…

“He’s shy, but in the past six months that’s changed a lot. He’s becoming a lot more open to other people. He has this extra confidence in himself that he definitely didn’t have before. When he’s in Barretstown, he has this feeling of freedom. And that gives him confidence. When he leaves he takes that with him.”