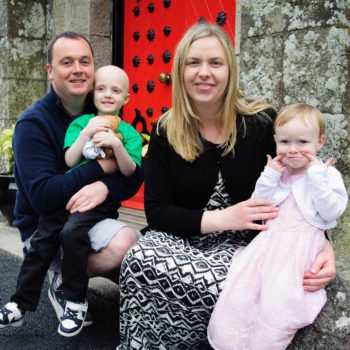 “We were just a normal family, then about eight weeks after I had our second child Anna, Danny was diagnosed with a brain tumour. He was two years and nine months old. In my heart I thought they were going to say he had an ear infection but they ran all these tests, and then they kept him in overnight so they could run a CT scan the next morning.
After the scan they called us in to a room and we were told that Danny had a brain tumour the size of a golf ball, and that he needed surgery immediately. They said:

“You need to get your family in, we don’t know how the surgery’s going to go.”

Danny was ten hours in surgery. When he came back he was lying there with tubes coming out from everywhere, and that’s when it fully dawned on me just how terribly sick he was. The doctors told us they’d got it all, that the tumour was the size of an orange, and that we were only about six weeks away from Danny not being with us!
Danny went through six cycles of chemotherapy over six months, and it was really rough on him. At one point I actually didn’t think he was going to make it through the treatment, it was that harsh.
We got to go home just before Christmas. Then in the new year we went to Barretstown. There’s something very magical about Barretstown, something very hopeful. Danny had been through a terrible time, he’d been isolated in hospital and hadn’t been able to do anything. He hadn’t really been allowed to just be a kid. But at Barretstown he was allowed to just be himself.
Barretstown gave us a real sense of being together again as a family. It wasn’t about Danny being sick. It was about all of us being there together and being a family unit and enjoying something together.
Barretstown gave Danny a life in himself. Back home when he’d be out with my friends’ kids, they’d all run off up the hill or climb a tree, and he’d be left behind. But at Barretstown he was free and he got to do whatever was going on with his new friends. He was part of something.
I think it was because he saw other children just like him. He made friends with a little girl called Abi and you could tell he was thinking, 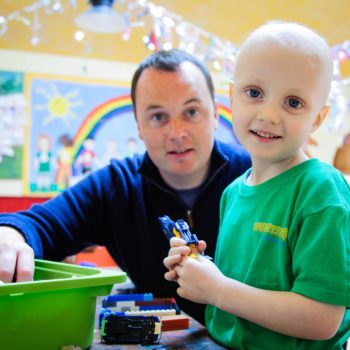 So it all started in Barretstown really, Danny’s recovery, and our recovery as a family. We began to get back on with living a normal life again.
Relapse is your worst fear though. You don’t want to hear that word. But on the 7th February 2014 we heard it. Danny was literally a few days short of a year in remission. We were devastated.
A routine scan showed up three or four nodules in the same area of Danny’s brain and we were told he would need a second surgery and follow up radiotherapy almost daily for seven weeks.

After the surgery I thought Danny was going to be like before. Just lying there in bed, frightened and unable to do anything. But he was completely different, and I’m positive that was the effect of Barretstown still at work in him.
About three weeks after the surgery we went back to Barretstown. And I think that second trip made a huge difference to Danny in the way he handled his radiation treatment. He had another amazing camp, but this time, because he was a little older, he got even more out of it than the first time. We all did. To be there as a family before the chaos began again, was hugely important.
We came home from Barretstown Family Camp the day before St. Patrick’s Day, and Danny started radiotherapy the day after. And because of Barretstown, Danny was in a really good frame of mind. His attitude was really positive… get in, get your radio done, get out, get on with life. Danny went through 31 almost daily radiotherapy sessions over seven weeks.
Then in June 2015, Danny got the all clear. Today, Danny is doing really well. He’s a happy go lucky child who takes everything in his stride. And Barretstown is still an important part of his life, very much alive in his mind. The impact that Barretstown has had on Danny, and on our whole family is massive.”