Imagine you are twelve years old. Two weeks away from starting secondary school. A big family holiday is in order.  But while you’re on holiday you get sick. Your parents think it’s heat stroke. But after a few days you’re still not better. Instead of enjoying your holiday, you’re brought to hospital. And after a few days, you start to feel a bit better. Then on the flight home you can see your parents are worried… they’re doing their best to keep smiling… to pretend everything’s okay, when in reality they’re fearing the worst.

This is what happened to Conor Fitzgerald and his family almost two years ago. They were on their summer holidays in Spain when they found out Conor had cancer.  Receiving a cancer diagnosis is traumatic enough. But can you imagine being told by doctors in a foreign language, and in a foreign country, that your child has cancer? It was the start of a tough journey for Conor and his family. One that would take its toll on Conor both physically and mentally. You see cancer doesn’t just attack a child’s body, it damages their confidence and their self-esteem too. 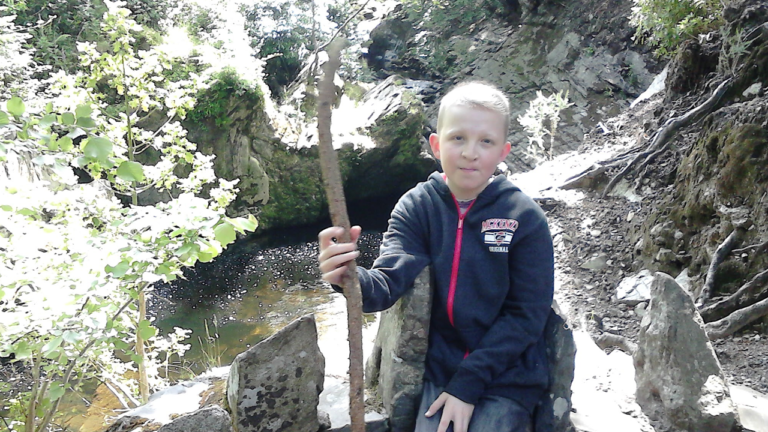 If you met the Fitzgerald’s before Conor got sick you’d say they were your typical family. There were conversations around the dinner table, arguments about what to watch on TV, and homework.  All the simple and everyday things that make being part of a family so special.  That all changed when Conor and his family returned home from Spain. He got really upset when they got home. Because his mam told him he had to go to hospital and miss his first day of secondary school.  All Conor wanted to do was start school. Sadly, Conor didn’t get to start school with his friends. Aft􀀁er being checked into Temple Street, his doctors sent him to Crumlin.  Conor had Leukemia and he had to start cancer treatment immediately.

His treatment wore him down. He didn’t have the energy to leave the house. And even if he wanted to, he’d risk picking up an infection that could put him in hospital. Conor’s parents had to split themselves between being in hospital and looking after Conor, and caring for their other four children. His mam often had to get their three eldest sons to care for their youngest, Isabel, who was only eight. Cancer kept Conor out of school, and away from his friends for eight and a half months. He started going into a shell. He couldn’t go anywhere except hospital

We couldn’t bring Conor anywhere. Because he had to have his tablets, get his bloods checked… everything revolved around hospitals and medicines.”

When Conor heard about Barretstown, he didn’t want to go. He told his mam he didn’t want to go anywhere that had anything to do with cancer. But when he came he found out Barretstown isn’t about having
an illness at all. It’s about having fun! Through our programme of activities – what we call Therapeutic Recreation – Conor started to get his self-confidence back. He started to believe in himself again.  He met other children with serious illnesses who knew what he was going through. Conor found out he wasn’t alone.

I think you’ll agree that children like Conor desperately need a bit of magic in their lives. I’m happy to tell you that the magic Conor felt at Barretstown stayed with him long aft􀀁er he left camp. It was there when he started back at school last September. This is what his mam told us.

He said to me, ‘I’m enjoying being back in school now because I don’t feel awkward anymore’. I think last year he felt people were looking at him.  For the first time since he got sick I felt like I was back talking to my son. The big part of him, my funny, outgoing and happy boy that cancer had taken away, had returned. And I believe that Barretstown was the reason.”

When a child is fighting serious illness they forget what it means to be a child.  That’s when they need Barretstown.  Our Summer appeal helps us to raise the €4.8 million that we need each year to run our programmes, over 96% of which comes from voluntary contributions from generous individuals and companies like you.