Helen O’Callaghan reports on a volunteer programme that aims to ease the boredom and uncertainty experienced by children in hospital.

FIFTEEN years old and a patient at Cork University Hospital (CUH), he was distant at first. Drawing pictures just didn’t do it for him. But when it came to sticking googly eyes on crepe-covered plastic balls and launching them out of a catapult made of lollipop sticks — à la Angry Birds — his attention was well and truly grabbed. “By the time we left, he was much chattier,” says Aisling Hurley, a 26-year-old adapted physical activity graduate and a volunteer on Barretstown’s Hospital Outreach Programme (HOP). Barretstown, a specially designed camp in Co Kildare, provides therapeutic recreation programmes for children with serious illnesses.

Barretstown started HOP in 2011, with the aim of bringing the spirit of Barretstown to children and families in hospitals around the country. It’s in place in Limerick, Cork, Dublin, Belfast, and Liverpool. Last year, it served 1,600 children, 414 of them in Cork. Aisling, from Cobh, is a veteran Barretstown camp volunteer — she did nine months there in 2012 and the same again in 2015. She has volunteered twice on HOP in CUH. It means spending a day in the hospital (9.30am-4pm) and bringing playful, fun activities to young patients. HOP comes to CUH on the last Wednesday in the month. It works collaboratively with hospital staff to create activity-based programmes focused on improving quality of life during a time often laden with fear, stress and uncertainty.

We so look forward to HOP coming — you know every child’s going to be taken care of,”

CUH play specialist Anne Olney who has around 30 children in the surgical/medical ward on the fifth floor, as well as 26 babies and toddlers on the first floor. “The HOP volunteers swarm all over the hospital. I give the leader the patient list and I earmark certain patients, like ‘look, there’s a teen down there who’s self-harming — she’s very low.  “Can you send somebody in to play a board game or have a bit of banter?’” Olney says male college student volunteers work wonders with teen boys. “Teen boys are very hard to get going,” she says. “With the play specialist, it’s like ‘get away from me’. They associate me with toys and young children.  “But if I send a few young fellows down with a deck of cards, two or three of them might sit around the bed, say ‘how’s it going, did you hear the one about…’ They might play a few card tricks and they’re all laughing — it’s brilliant.”HOP offers creative, developmentally appropriate activities and interactions. Last month, nurses in CUH baby ward directed volunteers to a long-stay toddler.”

“He’s slightly developmentally delayed because of lack of stimulation and being a bit institutionalised. They did some developmental stuff with him,” says Olney. While some HOP volunteers — often college students or retired people — sit in wards and engage individual patients, others base themselves in the playroom. They decorate it to a theme — wizards and fairies, under the sea with mermaids, superheroes, or pirates. They’ve turned it into a space station, says Olney. “They draped sheets to make it look like outer space. A big physiotherapy ball was a satellite. The children made sputniks out of paper plates.” The young patients could be in with any ailment — because of accidents or fractures, appendicitis, infection, or chronic illnesses such as diabetes. “Children with cystic fibrosis often come in for two weeks at a time for physiotherapy and antibiotics,” she says. “Being in isolation, they get very bored. The HOP volunteers gown up and bring play to them.” Eva Caulwell, outreach co-ordinator with Barretstown, says their vision is that every child with a serious illness should enjoy their childhood. 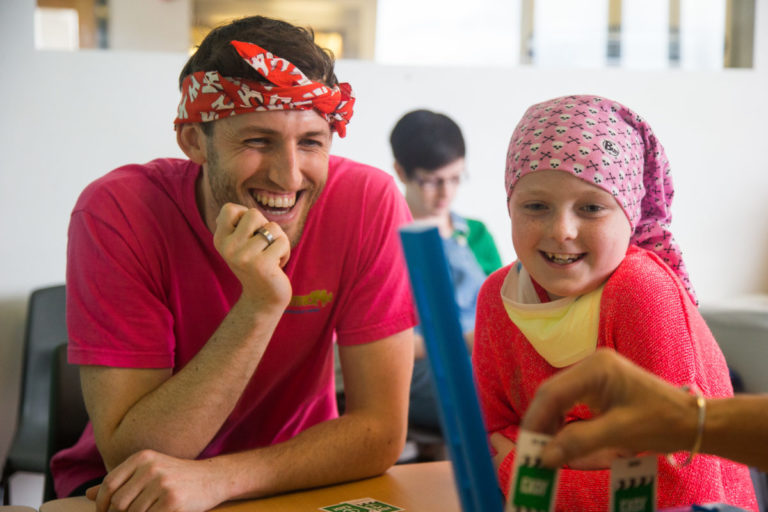 “Barretstown aims to rebuild the lives of children. Being in hospital is such a tough time for them and their families,” she says, adding that doctors and nurses treat the physical, but HOP impacts on the psychosocial aspect. “[The HOP volunteer] isn’t going to poke or prod the child. The child is given a choice about what they’d like to do — children generally don’t get choices in hospital.” And parents love HOP too. “While their child is re-engaging with their childhood, parents can take a much-needed break — nip out for a coffee or to make an important phone call,” says Caulwell. Parents say they’d have “cracked up” but for HOP and hospital play in general. “They say ‘we couldn’t have sat by the bedside every day trying to keep her going and keep her spirits up’.” Olney is convinced play helps children get better. “We’ve had long-stay patients — they’ve maybe had complications after surgery and had to stay longer than anticipated. They came into the playroom day after day looking for activities. “I really do feel it helped the healing process.” HOP and play in general, she says, helps take the trauma out of the hospital experience for children.

So when they look back, it’s not just needles and pain and being scared. There is a good side. They go out and tell their friends and spread the word that it’s not all bad.”