All Misha Ffrench Molloy wants is to be a “normal” 14-year-old, whose biggest worries are her upcoming Junior Cert and what to wear to the next disco. However, as a teenager with Juvenile Idiopathic Arthritis (JIA), life is an uphill battle for Misha against infections, fevers, aches and pains, loss of mobility, chronic fatigue and the side effects of her medication.

She has missed a lot of school due to her arthritis and has to go in on crutches or in a wheelchair when her symptoms flare up. Saddest of all, she has no close friends in school. Misha says that, “if I had cancer, I would have more support”.

The teenager is suffering from an invisible disease and, like an iceberg, her health problems lurk below the surface. Her mother, Jackie Ffrench, says that “Misha has no close school friends because they do not understand her condition and that has been one of the biggest negative side effects for her. Raising awareness of JIA in schools, among pupils and teachers, is a huge challenge, and there should be more support for children like Misha.

“She has missed a lot of days of school this year and many classes, due to stretch and nap breaks. The school don’t see or know the Misha who laughs her heart out at Barrettstown or is winning awards with the Order of Malta. They only see the quiet, silent Misha whose trust and confidence have been taken from her.” 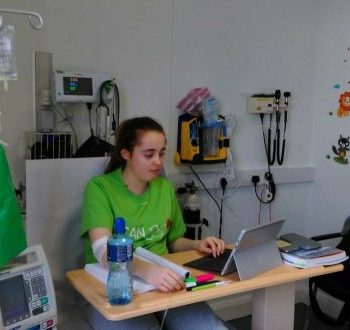 Misha has shown symptoms of JIA since the age of two years, presenting with lots of viruses, but there were no tests or scans that could confirm the condition, and she wasn’t diagnosed until the age of 10. She did not present with the normal swellings and had a normal blood count which showed no inflammatory markers making her diagnosis more difficult.

For years, Jackie was dismissed by medical professionals as an anxious, over-reacting mother and she was even accused of trying to “fit Misha into the same box” as her own Dad who also suffers from arthritis. Nobody listened until she got an appointment to see paediatric rheumatologist Dr Orla Killeen at Crumlin Children’s Hospital on April 2nd, 2014, who quickly diagnosed Misha with JIA.

She was immediately started on medication and was in theatre for steroid joint injections the following week. The current waiting list to see a paediatric rheumatologist is almost three years, the worst standard in Europe. The side-effects of Misha’s medication would make a grown man cry, according to her mother. She spent three and a half years on Methotrexate, a disease-modifying chemotherapy drug that causes severe nausea. Then there are the side-effects from the biologic drugs, such as headaches, nausea, injection site reactions and stinging. Misha has already tried and failed two biologic drugs and is on a third.

The arthritis spread into Misha’s jaws in January 2015, but the only way to confirm this was with an MRI scan for which they had to wait 16 months. “If people could see what children and families living with JIA go through on a daily basis, it might be taken more seriously. It’s a condition that puts huge emotional, physical and financial pressure on families, and for myself, as a single parent, it has meant a lot of sacrifices, but when your child is sick you would do anything for them,” says Jackie.

The financial stress is a huge issue for Jackie who had to take carer’s leave in 2015, cutting down to two days a week and relying on domiciliary care allowance to supplement her greatly reduced income. Like many parents of children with JIA, her savings are long gone and she has had to borrow money to get by. Misha has a medical card, but they still need VHI. There are many additional expenses including over-the-counter drugs, vitamins and supplements, private consultant appointments and travel costs.

Every second week, Misha goes into the Paediatric Day Ward at University Hospital Galway for her infusion of biologic drugs. She is very grateful to the nurses there who recognise the struggle children like her with chronic conditions are going through and have been very supportive.

Until March last year, they had to attend Crumlin for her bimonthly infusions, leaving home at 4am to face a gruelling 16-hour day travelling to and from Dublin for treatment. While children can grow out of JIA, Jackie is not optimistic about Misha’s prognosis, given the strong family history of arthritis and the fact her disease has been difficult to control.

Jackie and Misha are acutely aware that when she is 16, Misha will be moving from the paediatric rheumatology service into the minefield of the adult services which is a very difficult transition for teenagers.

While there are a lot of negatives to Misha’s story, Jackie is keen to highlight the positives of her journey also. Soon after diagnosis, Misha was referred to Barretstown and through the power of social media, she came across iCAN, the Irish Children’s Arthritis Network.

“It was such a relief to find out there were other children and families out there on a similar journey to us. iCAN helped us to accept what we were dealing with and to prepare for situations like treatments not working or applying for entitlements.

“Barrettstown Children’s Camps gave Misha back her childhood and allowed her to be herself. She has friends from Denmark, Sweden, Italy, all over the place. They have opened her mind up to trying new things and she is planning to go back to Barrettstown to train as a Cara (voluntary helper) when she is older.”

Her consultant-led multidisciplinary team includes a physiotherapist, occupational therapist and nurse specialist who are wonderful, and Misha feels she has got great benefit from the psychological support she receives. She has been taught how to build up her own pain tool kit to help manage her disease and to build up her resilience and confidence.

“It can be so intimidating talking to the doctors and sometimes they don’t want to let me talk or to hear what I have to say, but, thanks to the psychology, I can talk for myself now. Nobody else can tell me how my body is feeling, I am the only one who knows that, but I have the strength now to say it,” says Misha.

There have been many nights when Jackie and Misha sat up crying together after yet another tough day, but they have learned to put coping mechanisms in place. “We love sitting down in front of the fire to watch a comedy and laugh out loud. We get in the car and go for a drive to Clare or Connemara, just to get out of our heads and bring some joy to the day. We are lucky to live near a beach for fresh air and walks and to have a really close supportive family.”

Misha has two good friends outside school who provide emotional support and friendship and is very involved in the Order of Malta. Jackie is also fortunate to have a very understanding and empathetic boss and team where she works.

“Our story is one of many around the country. Our Government should be taking Juvenile Idiopathic Arthritis more seriously. It shouldn’t be this tough for children like Misha. “They deserve to be given better care, which will enable them to grow into confident young people, able to contribute to the workforce and have the same chances in life as other children,” says Jackie.

– Arthritis in children and young people under 16 is now called juvenile idiopathic arthritis, a group of illnesses which have been put under one name because they share similar symptoms.

– Arthritis means one or more joints are inflamed – swollen, painful and stiff.

– There is no known cause for JIA and it can begin at any age, but commonly shows up in younger children. Many types are more common in girls.

– Treatments are improving all the time. There is no cure for JIA but many children go into remission which means symptoms disappear, often forever.

– About three in five children with JIA have few or no physical problems as adults. For the remaining children, arthritis can unfortunately cause some longer-term problems and they may continue to need treatment to control their disease.

If you would like to more about Barretstown and what we do please email us at info@barretstown.org or call 045864115