Few of us even want to think about our children becoming seriously ill, let alone imagine it. Possibly because the reality is far worse than most of our imaginations.

Putting terror and heartache aside, the sheer logistics of coping with a child’s cancer can have an incredibly traumatic impact on family life.  September is International Children’s Cancer Awareness Month, but few of us would be aware just how brutal an experience with childhood cancer can be, and what supports parents need.

“From the moment of diagnosis normal life ends, and survival mode begins,” explains Dr Jane Pears, Paediatric Consultant Oncologist in Our Lady’s Children’s Hospital Crumlin.  For the many parents who don’t live near the Dublin hospital, that can mean constant travelling. 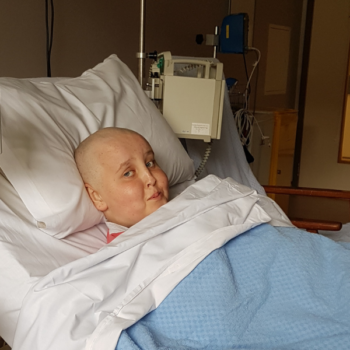 “Months can go by without the family being together. Often one parent has to temporarily give up work to stay with the child who is ill, while siblings have to be farmed out or child care sorted. It disrupts all normal living and for the child, they become isolated from school and friends which can have a long-term impact. The risk of course then, is that they feel defined by their illness.”

When a child has leaukaemia for example, which makes up about a third of childhood cancers, typically treatment is long; three and a half years on average for boys, and two and a half years for girls – months and years where exposure to infection can mean weeks in hospital.

“Cancer nearly destroyed our way of life,” says Debbie Byrne mother of four from Kildare. Their nightmare began in April 2017, just two weeks after their fourth son Oscar was born. James was 12 and his brothers were 10 and eight.

“I still remember so vividly the day that James was diagnosed. Following a small fall, he ended up with a huge bruise that didn’t go away, and then a rash. I took him to the GP who suggested we go to hospital for some blood tests. I had to bribe James with the promise of a nice lunch with him and me afterwards to persuade him.  But we never got that lunch.

That day they told me he had leukaemia and were transferring him immediately up to Crumlin. I was so shocked, I just muttered about getting the car, even though they were already hooking him up to IV’s and drips, and they had to tell me we would be going by ambulance.  Like the flip of a coin everything changed, and our lives went into survival mode.”

Nearly 200 children are diagnosed with cancer in Ireland every year.  The next paragraph comes with a sensitivity warning.

“Within two days of James being diagnosed they had given him so much fluid to flush out his system he started getting nosebleeds. Because his platelets were so low, the blood wouldn’t clot. By the next day blood was pouring from his nose and then his mouth.  Two days before we had been a normal family planning a trip to Ikea, and now I was holding a bowl up to his nose, while my husband wiped away what was coming out of his mouth. He was having blood transfusions, and platelet transfusions and it was mad. We were in shock and disbelief.”

James deteriorated quickly and ended up with a viral infection so spent the month of June in hospital.   “We’d get out one day, and the next day we’d be going back in for bloods and they’d keep us in, or we’d be out and he’d collapse and go back in by ambulance,” says Debbie. “It was relentless. I had a newborn baby and two other children at home.”

Debbie had to learn to change dressings, take bloods and administer chemotherapy through his hickman line in his chest, so they only had to travel to Crumlin twice a week rather than five or six

“It was daunting to take on that kind of role not even having chosen science in secondary school.  We couldn’t let people come through the door at home and we didn’t go out in case anyone picked up an infection. We were all housebound.”

James spent the next six weeks having chemo, four of those weeks in hospital suffering from infections. “We watched our boy disappear. By the time he came home, he had lost so much weight we had to carry him upstairs, and help him to the toilet. He was so weak he had to use a wheelchair.”

James had loved the Scouts and had been camping with them the weekend before his diagnosis. “He was always doing something active with them. That was the worst thing about his diagnosis. It took all that away from him.”

Because James missed the Scouts Jamboree, their hospital social worker recommended they apply to Barretstown, which runs therapeutic recreation programmes for children and their families affected by cancer and serious illness.  At first Debby was reluctant to let him go. 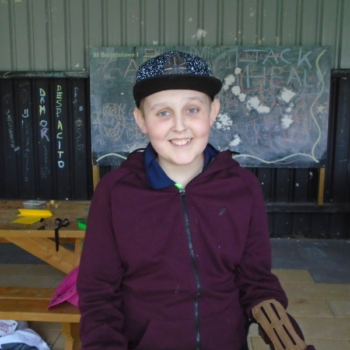 “Parents are scared to let their child out of their sight,” says Dee Ahearn, CEO of Barretstown. “But we have a fully staffed medical unit on campus so that children can continue to get bloods or treatment whilst actually learning to be a child again.  Everything we do is about giving control and confidence back to the children.”

“I would go as far as to say that programmes like this are as important as the chemo treatment, providing physical, emotional and psychological resilience and unpicking the image a child might have gained of themselves as being defined as a child with a serious illness,” explains Dr Pears.

Childhood cancer mortality rates have declined significantly and substantially since the mid 60’s so that now fewer than 25 children under 15 have died from cancer per year from the 1990’s onwards, compared with 50-60 per year from the 1950’s-70’s. But with an average of 137 new cases of childhood cancer under the age of 15 being diagnosed each year, there are still many families living through the horror of childhood cancer.   The loss of control that many children and their families experience as a result can gradually erode their confidence and memory of normal life.

“What therapeutic recreation can provide that a hospital can’t, is the chance for the family to spend positive time together, focusing on having fun together,” explains Dr Pears. “We are so lucky to have a camp like Barretstown in Ireland as they are a member of the Serious Fun Children’s Network of only 30 camps and programmes around the world.  Research has proved they contribute to recovery by helping families and children remember how to live normal lives despite the cancer.”

There are several differences between child and adult cancer, but one of the most obvious is the fact that child cancer can halt the physical and emotional development that is such a crucial part of childhood.  Therapeutic recreation is proven to help re-start it. 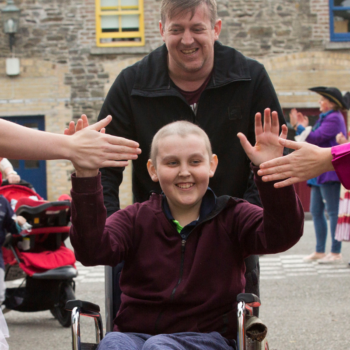 James spent a week in a Barretstown camp last summer.  Collecting him, Debbie saw a different child to the one she had dropped off. “It was like getting our boy back. He was so happy and energised with all the activities he had done. Even though he was in a wheelchair, and needed constant supervision and treatment, he had gone horse-riding, zip-lining, archery, sung and danced. It really opened my eyes to the fact we had been so consumed with his cancer and immunity that we had forgotten about keeping him active and happy.”

Therapeutic recreation programmes ensure that children gain, or regain, skills and an understanding of their own abilities. “It makes these children believe that can achieve anything and their illness doesn’t define them anymore. They also get to talk with children like them and share experiences,” says Ahearn.

James still has two years of treatment left, but he is back at school, and while longer periods of walking and stairs can be difficult, he has been able to leave his wheelchair at home and carry his own school bag.  They’re simple things but make a huge difference to his confidence around his peers.

“He likes school and is really making the effort to settle in well.  It’s hard obviously because I suppose he is that child that everybody says, ‘Hi’ to but last year they were nearly afraid to approach him.”

James had two months of primary school left when he was first diagnosed but only made it in for one final day, graduation day.  He he had lost all his hair by then  By the time he started secondary school last year it had grown back a bit.

“When he lost his hair for the second time though it affected him more because he was in secondary school so he wore a hat. It grew back in patches but I told him that soon he might get a little spike on top.  It was like our little goal. Just two week before his diagnosis he had got a haircut and we got him some gel. But then he lost all his hair.  He has kept that gel for nearly two years, and it became symbolic of his recovery. He is finally able to use it again which is a great boost for him.  We still have a long way to go, but thankfully now we are careful not to let his cancer destroy our family life.”

Barretstown gets a small amount of government funding, raising the majority of the €5.5 million annual bill through voluntary donations.  “The camps are free of charge for families and we’re lucky to get 2% funding from government,” says Ahearn. “Learning to live with a child with cancer can have an enormous impact on the entire family.  We do individual child camps, family camps and sibling camps. I’ve talked with families in the dining hall who tell me it’s often the first time they’ve sat down together as a family for months. When a child has cancer, not only does the child need to get better, but the family has to heal.”

If you would like to support Barretstown, go to www.barretstown.org