One of our long term corporate supporters Amundi took on a charity cycle for Barretstown. Here is the story of their determination and how they took up this gruelling challenge to make a difference for seriously ill children. From everyone at Barretstown we just want to say Thank YOU!

On Thursday 13th June, 10 cyclists departed the Dublin office to begin a difficult challenge: to cycle over 600km from Amundi Dublin office to Amundi Paris office in just 5 days. It was a wet morning and the group left the office in the rain, which wasn’t pleasant as they had a long cycle ahead (160km to Rosslare). After an 18 hour boat journey (which felt like going back in time) the cyclists arrived in Cherbourg to a sunny warm 19 degrees which was ideal for the cycle to Bayeux. However after arriving in Bayeux the cyclists quickly learned about French closing times and had to settle for a nutritional McDonalds Big Mac for dinner!

The next day things started to get better, cycling through beautiful French towns and countryside, tasting the local coffee and cider (support team!).. After a nice but long day cycling the team arrived in Bernay, it is a beautiful French town which has held onto its historic look and feel. The team were joined there by 2 more French colleagues which was a warm welcome as none of us could speak French very well. After a good meal and some hydration it was time to sleep and prepare for another long day.

With the addition of our French colleagues we felt there was enough to have two groups (a fast group and a slow group apparently!) but somehow the fast group were slower… After arriving in our hotel in Rambouillet the team were prematurely celebrating knowing only 60km remained the next day into Paris. Before the last day began the group got a lot bigger as they were joined by a larger number of French colleagues.  After a scenic 60km cycle and reaching our destination the 23 cyclists were greeted upon arrival at the Amundi Paris office by Yves Perrier (Amundi CEO) and Guillaume Lesage. They were later entertained for lunch at the Amundi Restaurant on the 17th floor overlooking the Eiffel Tower, job done! 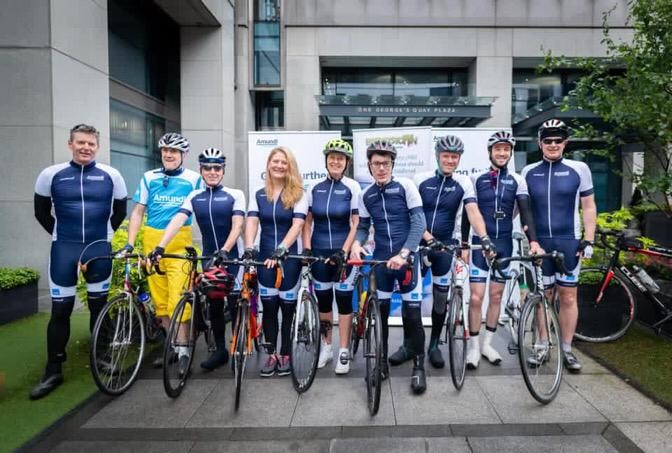